What is the Sunshine Coast Bike Route? 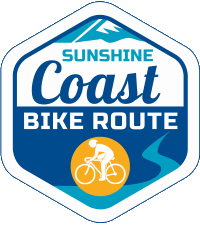 The Sunshine Coast Bike Route (SCBR) is a TraC project in partnership with the Sunshine Coast Tourism Association, local government, the Powell River Cycling Association and the BC Ministry of Transportation and Infrastructure. The SC Bike Route is a designated bike-touring route linking the entire Sunshine Coast from Langdale to Powell River. It has been designed to draw more cyclo-tourists to the region, while also serving the needs of local cyclists. The more pedals on the road, the stronger the case for investment in bike lanes!

Download the Sunshine Coast Bike Route app! The app contains everything local and visiting cyclists need to enjoy a ride on the Coast: direct and scenic route options, hill profiles, restaurants and craft breweries and other sites of interest.

Cyclists coming off the Langdale ferry are also greeted by a large Sunshine Coast Bike Route sign located in the overflow parking lot. The sign includes an overview map, directions on downloading the app, and custom made iron artwork.

Why a Coastal Bike Route? 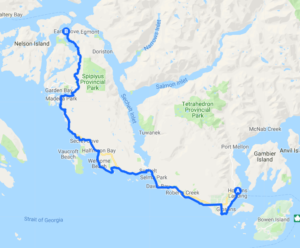 Cycling is one of the fastest growing recreational activities in North America, and cyclo-touring is a growing sector of the tourism economy.   Some facts to consider:

The Sunshine Coast is ideally situated to capitalize on this growing market.  We are the closest daytrip and multi-day destination to the Lower Mainland, easily accessible by visitors arriving via the Vancouver International Airport, and a natural part of a larger Circle Route that connects to Vancouver Island via Horseshoe Bay or Powell River.

Keep up to date with the progress of our initiatives, local cycling and transportation news and events we're organizing.